2011 11 01 Back to Hawthorn Pond Natural Area, a 40 acre site, south of Adams Street on Black River Court in Holland Township.  It contains a five-acre freshwater pond that is ringed with a path, also has lookout sites, a kayak launch ramp and fishing stations.
We were here on August 22 of this year, then there were machines working to make this place into a park.  Things are still scarred from the machines but next spring it will look better. 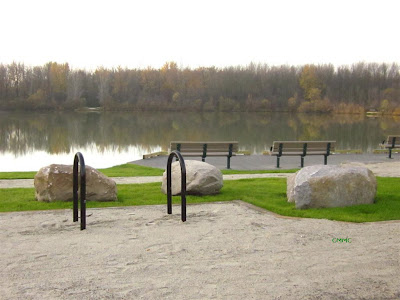 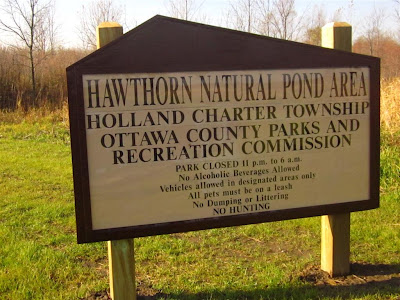 We walked counterclockwise part way around the pond until we came to a bit of a trail heading over to the Macatawa River.  I have to say I'm not overly impressed by this river, the water is brown and cloudy. 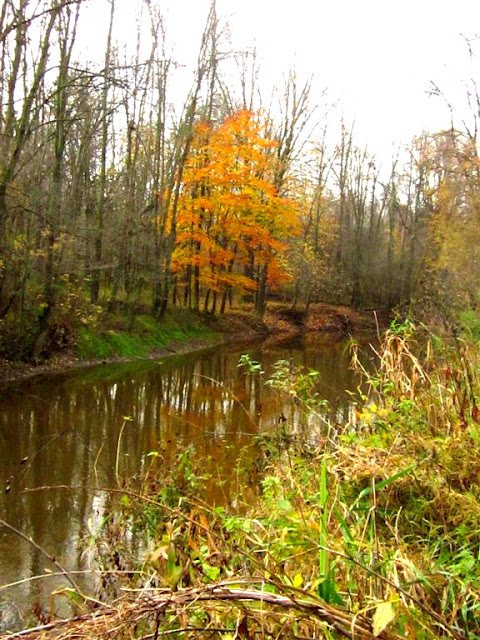 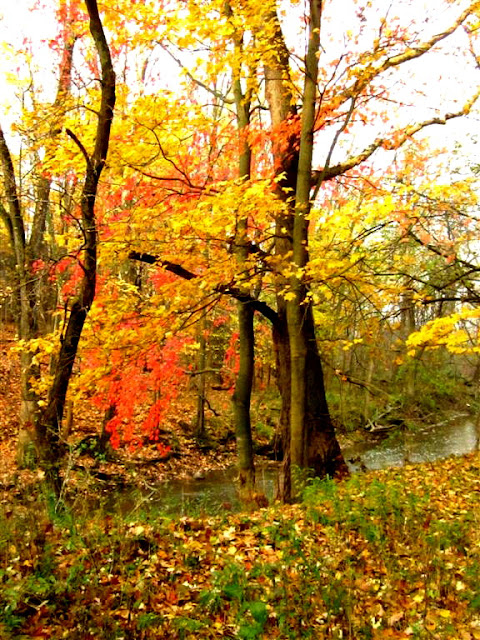 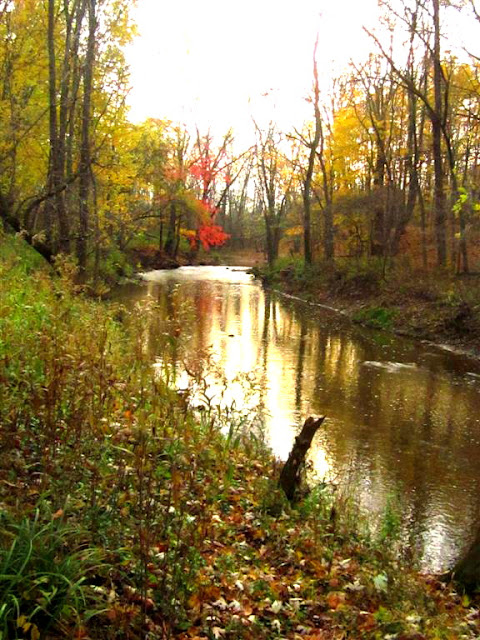 Of course we came to a deer trail and continued on it along the river, heading south then west towards highway
US 196 also known as the Gerald R. Ford Freeway, near exit 52.  Along the way we found some great trees, sycamores, paw paws, maples, oaks. 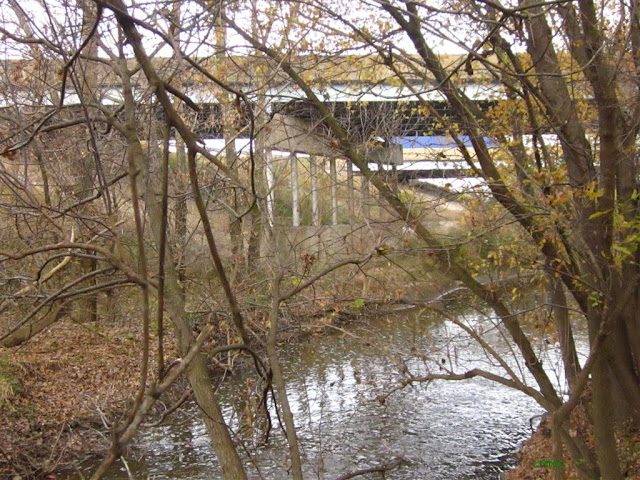 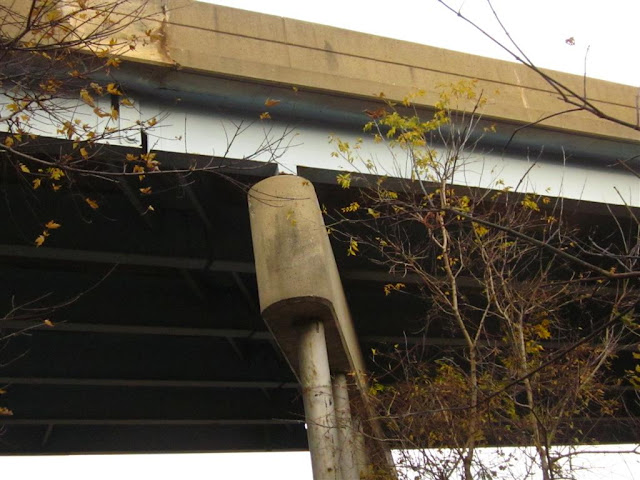 We walked north toward the pond and went through some very wet woods.  We even found smartweed blooming. 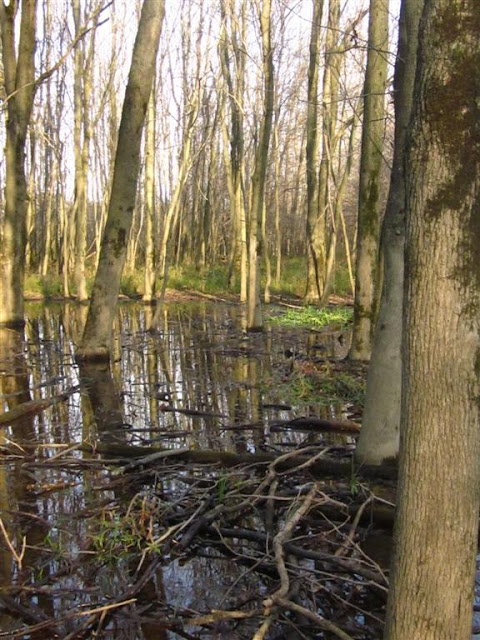 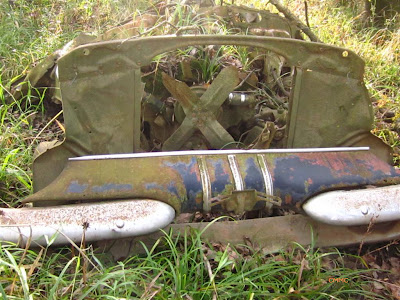 We came across this old car, Marie did some research and found out it is probably a 1955 Pontiac Chieftain.
Here are some maps, first map Hawthorn Pond is at the number 1. 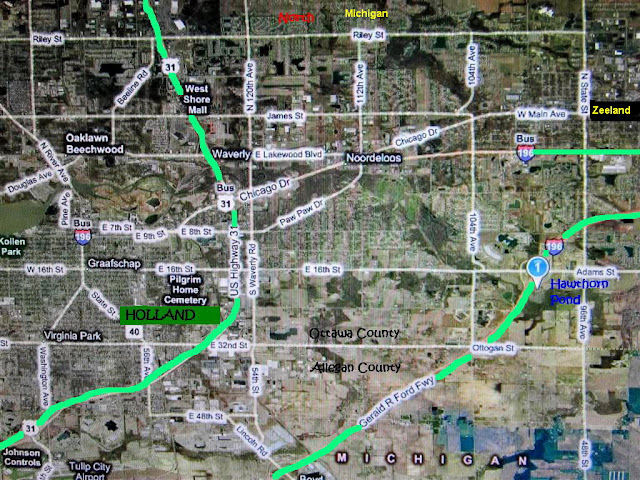 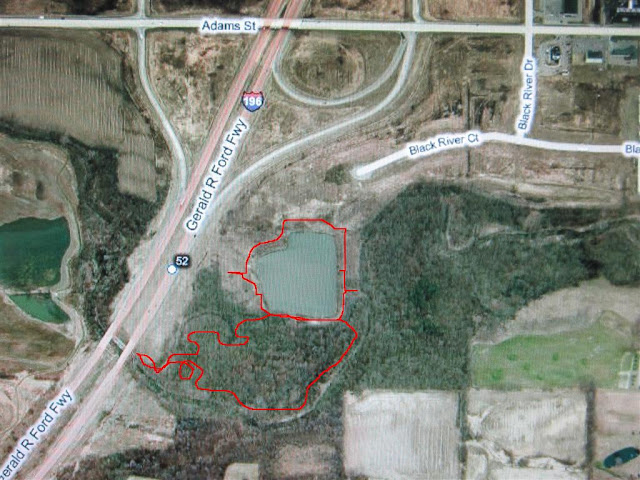 The red line is where we walked, sort of, about 1 mile total.
Next we drove down the road southwest 13.5 miles to Farview Nature Park and Horse Trail (6257 138th Avenue Allegan County Michigan).  We were here last on August 23, 2010. 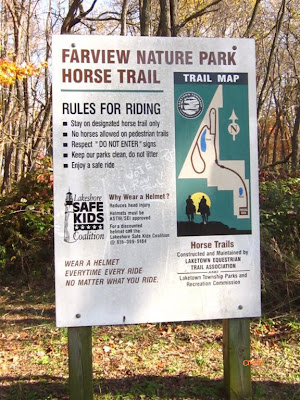 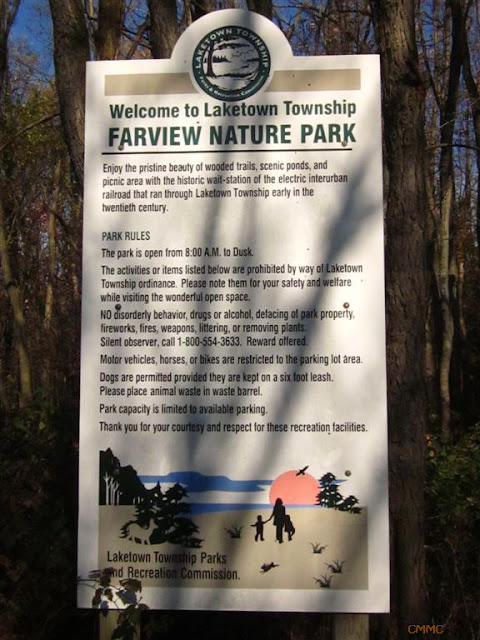 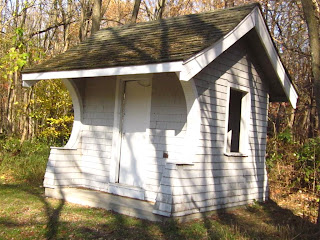 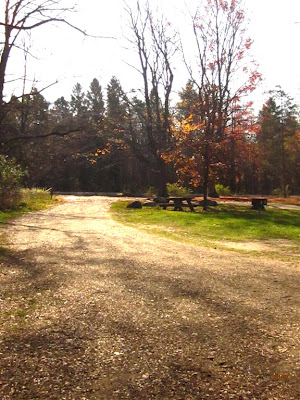 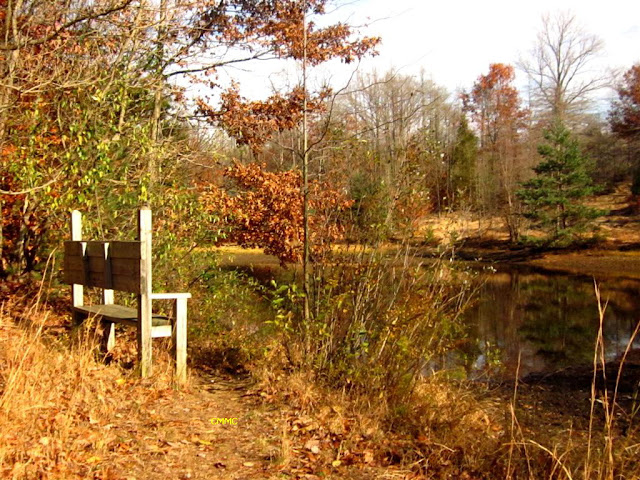 Bench at the pond. 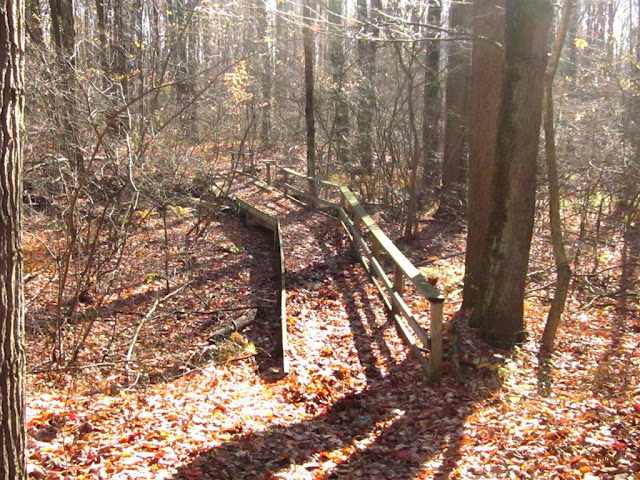 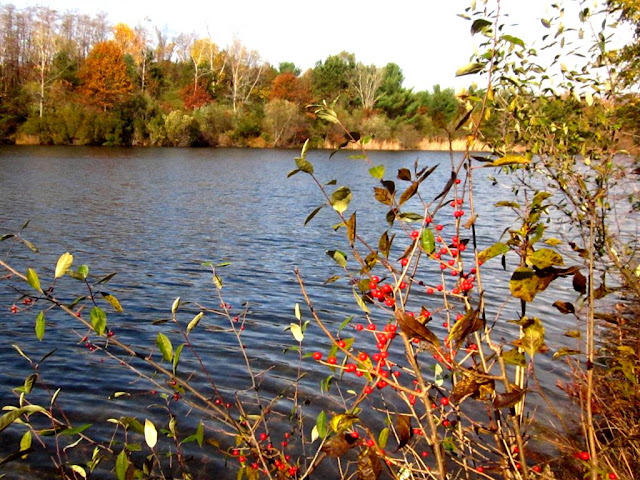 to the lake, Farview Lake.  The shrub with red berries is Winterberry (or Michigan Holly).  We found Nodding Ladies' Tresses but the petals were brown, far past their prime. 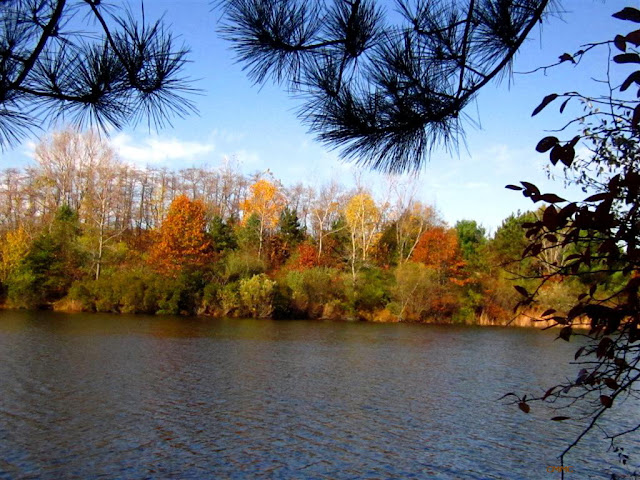 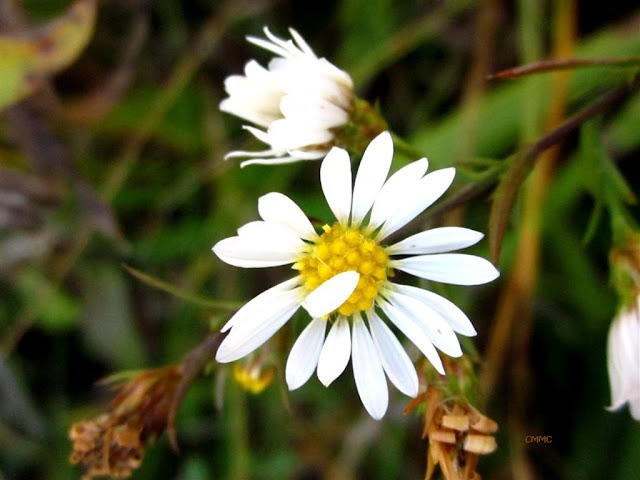 A few wildflowers still blooming!  Queen Anne's Lace, goldenrod,  and Spotted Knapweed  were blooming yet, along with this aster. 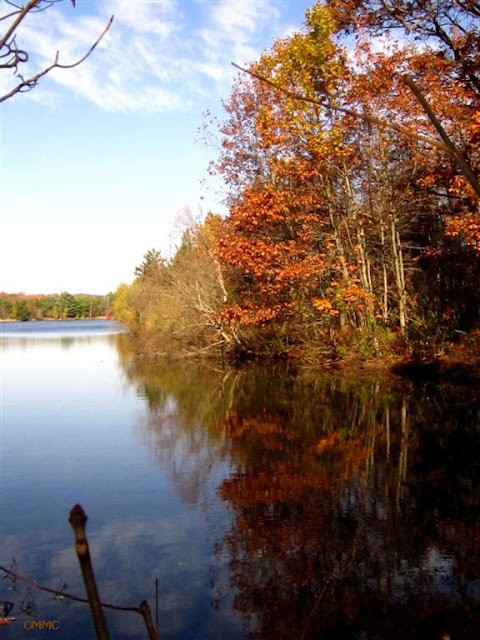 At the "top" of the lake we rested in a sunny, sandy spot.  Did some research in the tree books, Marie had a red dragonfly land right on the open book.  Nice. 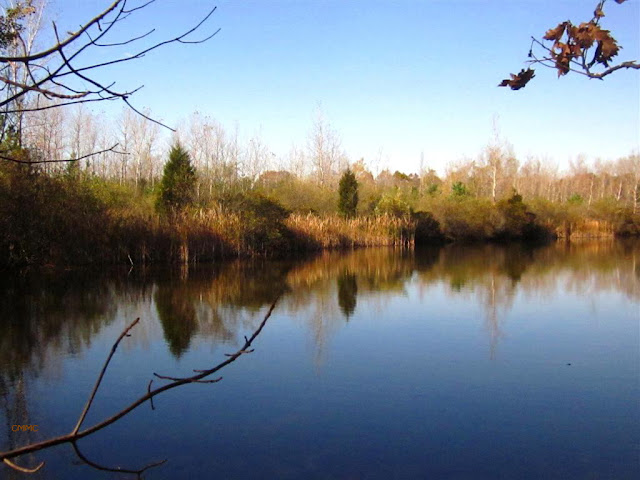 Walking around the lake, we saw a Common Buckeye butterfly, a pintail duck, a yellow butterfly, Bayberry bushes, Blue Jays, and sunfish. 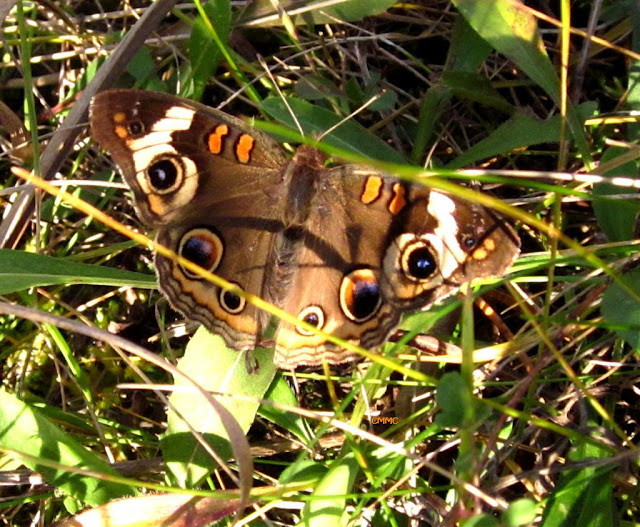 Top is the first Common Buckeye we saw, then 20 minutes later down the trail, another one. 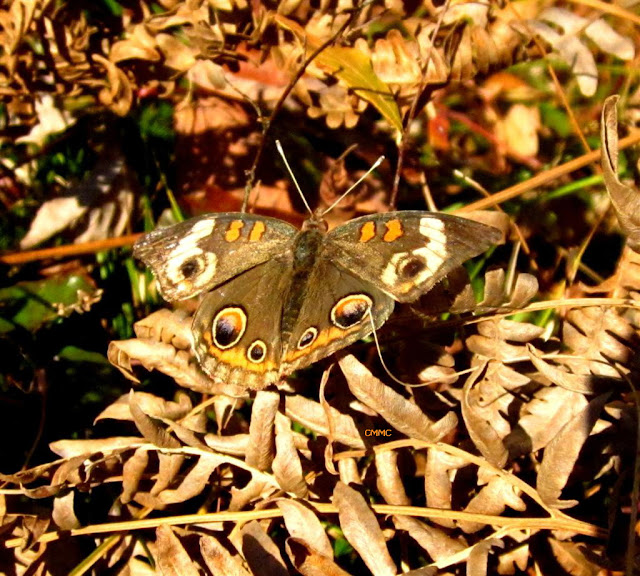 Farview has become a favorite place of mine, and so close to Saugatuck Dunes. Haven't been to Hawthorn yet, will have to check it out. Thanks for sharing!
Dave

Hey Dave, Have you found the Nodding Ladies' Tresses along the shores at Farview, they should be blooming now!
Glad you stopped by, Thanks.
:)