We found a plant we couldn't identify without our guide books and since it was raining we had left  the books in the car. 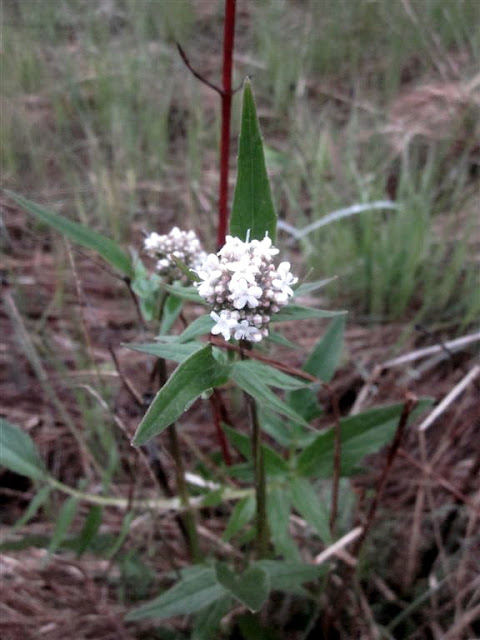 Swamp Valerian (Valeriana uliginosa)
Later, we discovered it was Swamp Valerian which we had seen here at the fen last June.  I also found something flowering, with paired leaves, maybe a honeysuckle? 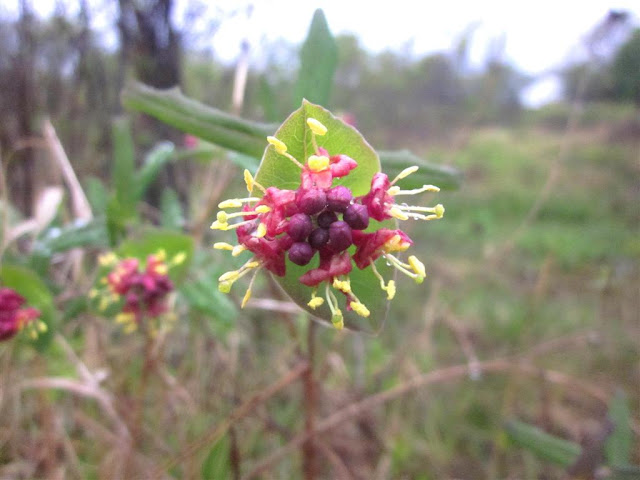 
Near Hastings our next stop is at Zhigaawin (She Gotta Win) owned by the Boy Scouts of America.  A little confusing here, there is a parking area but then there is a Stay Out sign at one of the trails (it may have been the wrong way on the disc golf course), so we followed the disc golf course.  This took us down a very steep hill, hang-on-to-the-trees steep, on the north side of the parking area.

Someone, probably Boy Scouts, had carved very good replicas of giant size Morels out of tree stumps.  At the bottom we climbed back up to a ridge of large trees with Flowering Dogwood blooming profusely below them.  What a sight!


Eventually, we looked out over Carter Lake from the high forested bluff.  We saw another path marked "Trail" where there are some footbridges but we decided to move on to the next park.  Before we left, Marie stopped to look at something orange in a tree that she glimpsed on the way into the park.


Remember awhile ago I gave Marie the book "Naturally Curious" by Mary Holland, it is a cool book with all sorts of info about nature.  Marie remembered seeing something called Orange Cedar Rust Gall in this book, and sure enough she found it in a cedar here at Zhigaawin!  Good eye Marie!  We stopped to check it out, I took a picture of it but it was quite high in the tree, so no close-ups.

Then on our way to a preserve that we haven't been to before - Carter Lake Preserve owned by Southwest Michigan Land Conservancy.

Marie parked along the road, usually there are not parking lots at these preserves but it was a quiet street to park along.  We saw the sign marking the preserve but weren't sure where to start as there was no trail near the sign.

We set off and headed down a hill of mown grass which felt like a part of someone's yard.  No trail markers yet to reassure us that we were on the right track.  Then we came to a steep bluff overlooking a huge marsh and Carter Lake to the left, here was the sign telling us we were on the trail and in the preserve.  Steps had been built into the side of the precipice and had a rope handrail.

At the bottom you are in the marsh, there are boards and cement blocks in the muddiest spots.  There is a bridge over a creek.

We made our way across the marsh when I saw something big and brown moving ahead!

It was a Sandhill Crane, and it wasn't far away.  Then another Sandhill Crane, wow they are big!  They were distressed and stalked back and forth across the trail ahead of us.  We looked close and saw two little fuzz balls, baby Sandhill Crane.  We couldn't go back a different way so as they moved off the trail we calmly and quickly moved away.


We checked out the preserve, the trails aren't very obvious.  We were back in the woods, then along a wet area.  Very nice.
We found a Mayapple blooming!
Met a friendly Chickadee,
saw a turtle shell, a chipmunk,

Marie ID'ed the same plant we had seen at the fen this morning, the paired leaved one.  We kept thinking it was a shrub but after closer examination we found it was a vine, 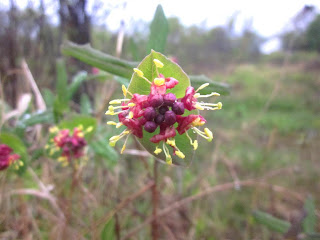 We helped a Phantom Cranefly out of a spider web, it flew right back into the web!
So I helped it out of the web again this time it landed safely on a tree.  Now there is a hungry spider at Carter Lake.
Carter Lake

Raindrop in Larch
We followed a trail into a beautiful, sunny, no it wasn't sunny - it was sprinkling and cloudy.

Oh it's not sunshine but a beautiful group of  Golden Ragwort!


We head back to the car passing the Sandhill Crane without much disturbance.  Back across the marsh.
Up the steps and back to the car.  We decided to check out a Hastings city park named Tyden Park.  There was construction going on in Hastings.
It's a nice city park, as city parks go, it has a bridge over the Thornapple River, and a trail.


It was raining hard by this time, so we geared up and followed the trail through some uninteresting "citified" woods.
We did a see a toad along the way.


I had read online about a trestle bridge here in Hastings so we went off in the car to find that.  We parked at the library and walked across the street to the bridge.


Bridges and history are interesting, but we are still in town with cars, people, and noise.


We drove north out of Hastings on to greener places and we found them on the Dolan Trail.

This trail is in the southeast corner of Kent County Michigan and the property is owned by Trout Unlimited.  We drove just north of the Coldwater River to a parking area.  The trail was marked with yellow signs and a new walkway had been put in to cross the very muddy places.

We walked east on the trail, seeing lots of spring wildflowers, many sycamore trees, and the Coldwater River.  I would definitely come here again, it's beautiful.

We had a bit of a problem.  It was late in the day, about 5pm, we had already let everyone know where we were and that we would be late.  The problem was we were only seeing North Country Trails signs, no more Dolan Trail signs.  As you know the NCT goes across the U.S..  Maybe if we had continued a bit farther we would have come to the rest of the Dolan Trail, but we played it safe and turned around.  Huh it's amazing the different things you see when you walk the opposite direction on a trail, so in the end it was all OK.  Oh and it was raining fairly hard.
It was pouring now and the traffic was heavy. We got to my house around 6:30, then Marie has another 35 minutes home.  How do we do it?  I really don't know, but it sure was a great day.
Posted by Plants Amaze Me at Friday, May 11, 2012

Fens are fun! Purple Avens, hey look at those stems. They're the same color as the outer petals of the flower. I did not notice that. Swamp Valerian looking very bridal. A special place. Then Carter Lake Preserve, another special place. Those Sandhill Cranes were scary but they were just protecting their little ones. Your photos of the flowers, especially the Miterwort with the hand lens. The Crane Fly with its black and white stockings. The sunny, Golden Ragwort. You just never know what'll be right around the corner. Look how that toad blended in with the stones around it. Bridges, we like bridges. Dolan Trail, thank you West Michigan Trout Unlimited, hit the right note. Yes, it was a long day but such fun!

You guys are hardcore muckers,but that is where the interesting stuff is. That sure is a nice dogwood and some of them flowers i never have seen before. thanks so much for sharing all the trips-
dave

Marie, we found some more interesting places, our park and places list must be close to 450, what do you think? Maybe more.

Glad you enjoy the photos, they are my memory, sorry I plagiarized your account, hope you don't mind.
:)

Dave, you are right we do get out in the muck! Just wait for the upcoming post, we were in a bit over our heads (figuratively speaking).
I'm glad you enjoy our trips, thanks for stopping by.
:)

You saw some really unusual (and beautiful) plants. With plenty of skunk cabbage! I had a day like that myself today.

Sand Hill Cranes, when working in yard I can hear them, usually don't see, their voice must carry a long distance... Great pictures, THANKS!!!

New Hampshire Gardener, It was a fun time, glad you had a good day. Don't forget to share it with us on your blog.
:)

kayak1 It was pretty exciting and a bit scary to come upon the Sandhill Crane, they are huge!
Thanks for the feedback.
:)

Wow, that was quite a day! Loved the cranes.

I was going to ask if you had posted anything lately, I haven't been receiving a notice. Tonight I got an e-mail notifying me of a number of posts you've done. It will take me a while to catch up, sorry.

quietsolopursuits, The Sandhill Cranes were so close, we just came up on them without noticing until I saw them (maybe 30 feet away), then they started with their croaking calls.

I don't like to disturb animals but they had calmed down when we came back through, and it was the only way back.

I have had problems with this Blogspot/Blogger Google site too. I have had other people say they were not receiving the emails.

One morning I logged on and my whole blog had been REMOVED! At that point I thought - okay it's done, rather freeing.
They wanted a phone number for security reasons! Argh!

Glad things are working now. Next post will have another bird maybe you can help identify.

Thanks for stopping by, Chris :)