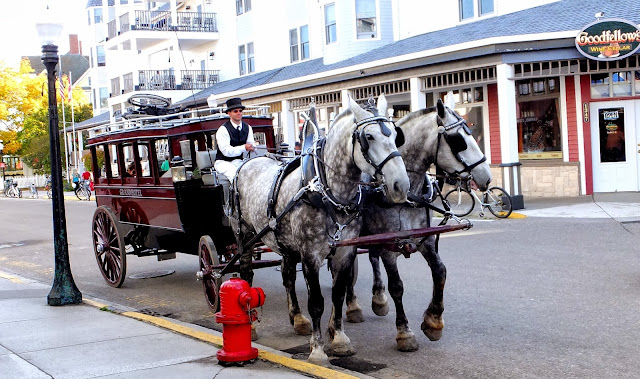 Mackinac Island is located in Michigan, in Lake Huron, at the eastern end of the Straits of Mackinac, between Michigan's Upper and Lower Peninsulas. 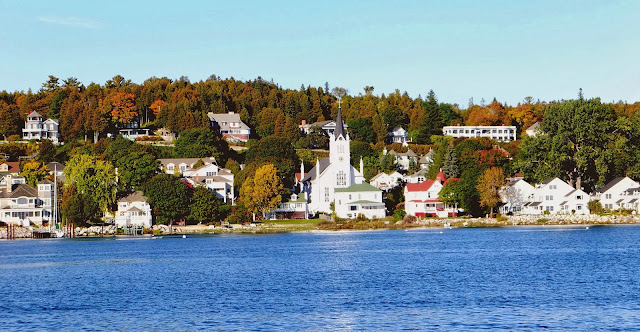 Mackinac Island is about 8 miles in circumference.   An 8-mile road follows the island's perimeter, and numerous roads, trails and paths cover the interior.
More than 80 percent of the island is preserved as Mackinac Island State Park. 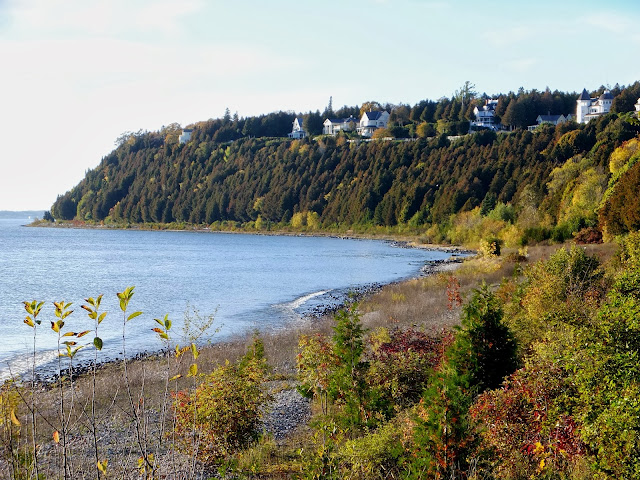 A unique local ordinance prohibits the use of any motor vehicles on the island. The most common means of travel are foot, bicycle, or horses. Certain exceptions include emergency vehicles, snowmobiles in winter, and golf carts for on-course use only.  Most tourists come to the island by ferryboat. 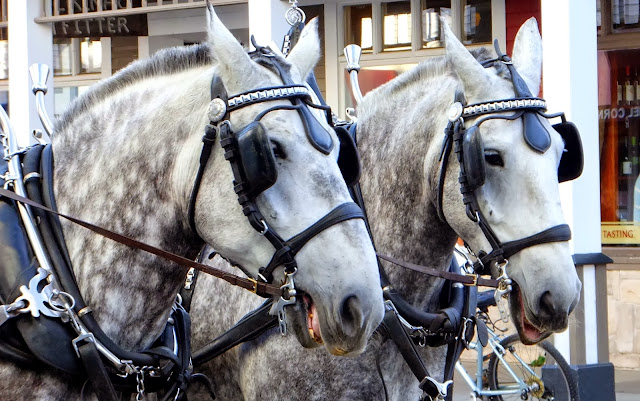 Mackinac Island is also famous for the many fudge shops on the island. The island has a very large industry making fudge in a traditional manner, creating them on cold marble slabs.
Mackinac Island is a fun place to visit every few years, especially in the off season. 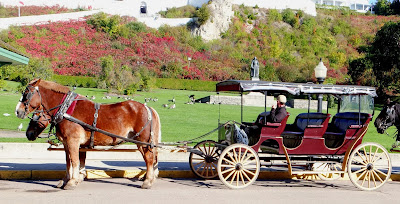 Mike happened to see a special coupon for the Harbour View Inn back in July, so we picked out two nights in October to spend on the island. 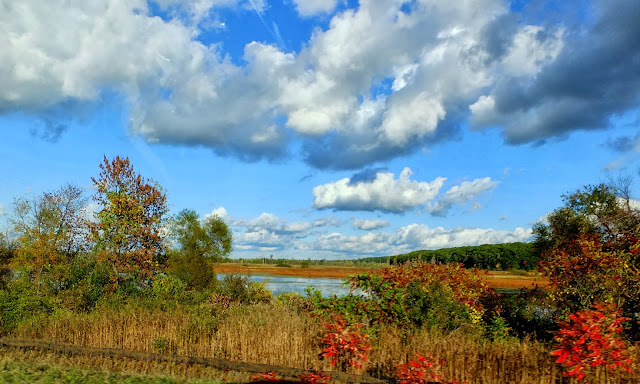 We started near Grand Haven, Michigan and spent a night at the cabin in Manistee County.  The clouds were great with lots of blue sky.  There was beautiful scenery along the 265 mile drive. 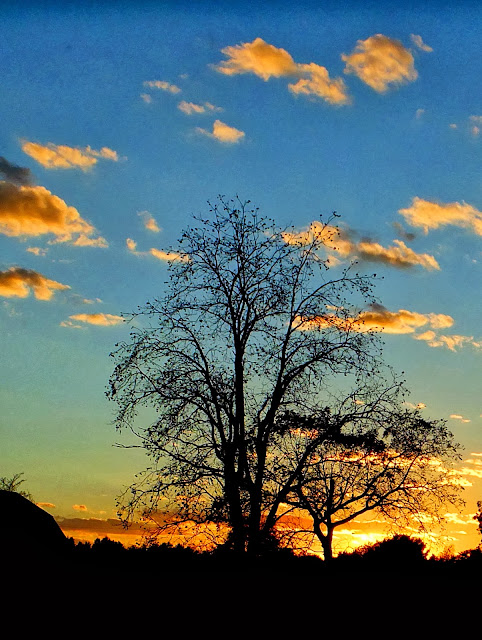 We ended up having four of the best days, weatherwise, that you can get in October in Michigan. 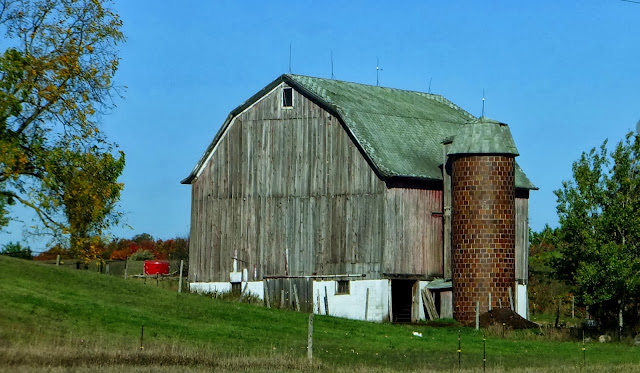 Barn along the way... 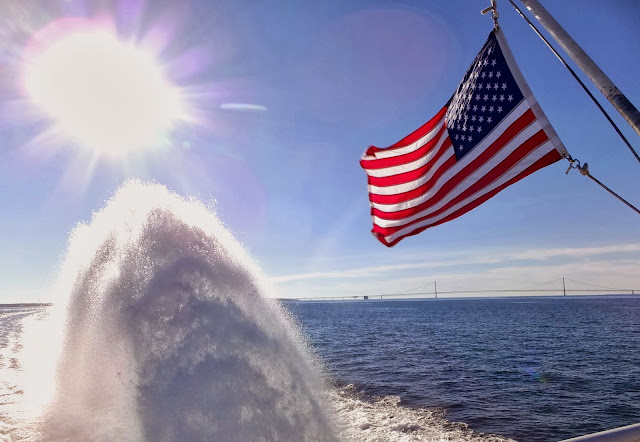 We chose Star Line Ferry, with their Hydro-Jets that produce a distinctive 35' roostertail spray, to cross 8 miles from Mackinaw City to Mackinac Island.
We did bring our bikes, it's $8 to bring them on the ferry and about $6 to$8 PER Hour to rent bikes.  If you are able to bring your own bikes, you can save a good bit of money and you have the convenience of transportation whenever you go somewhere. 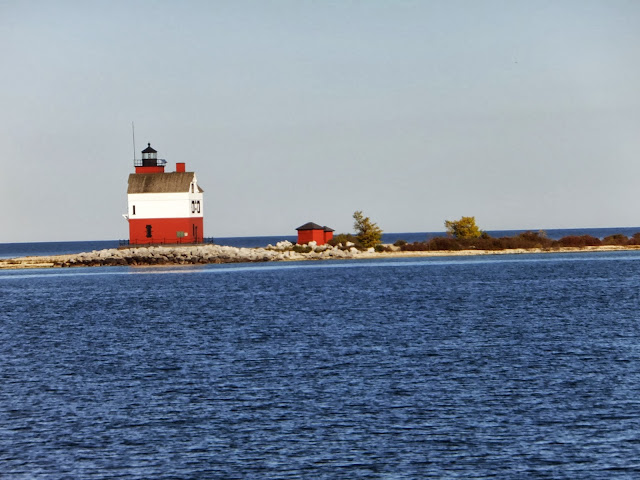 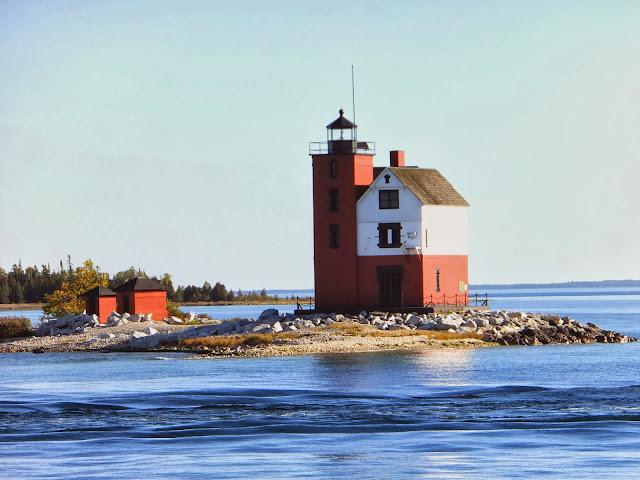 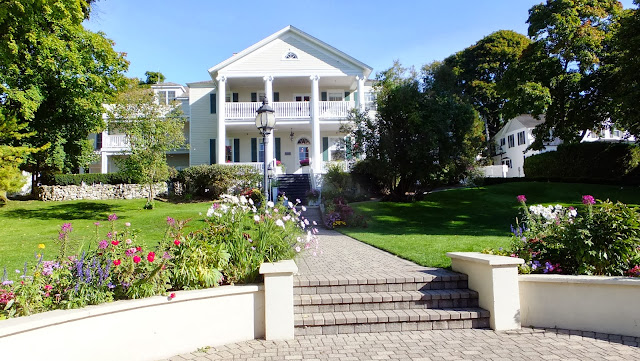 This is where we stayed, Harbour View Inn.  We had a nice room, very clean, and a yummy breakfast was included each morning. 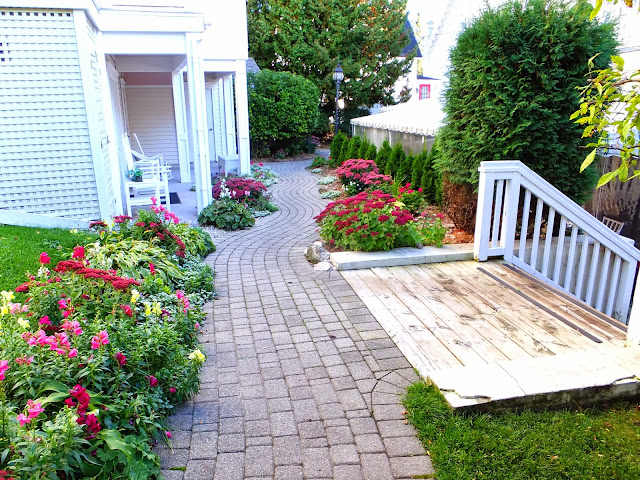 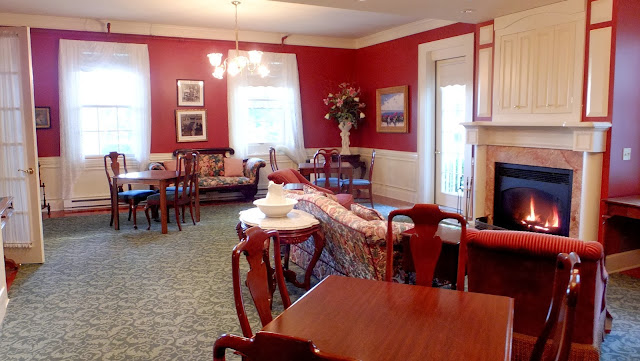 We rode our bikes around the island twice, stopping at all the interesting places along the way.  We walked the British Landing Nature Trail, the Lakeshore Nature Trial, we pedaled to the interior of the island to find Eagle Point cave, we saw Arch Rock, Fort Holmes, and visited the U.S. Post Cemetery. 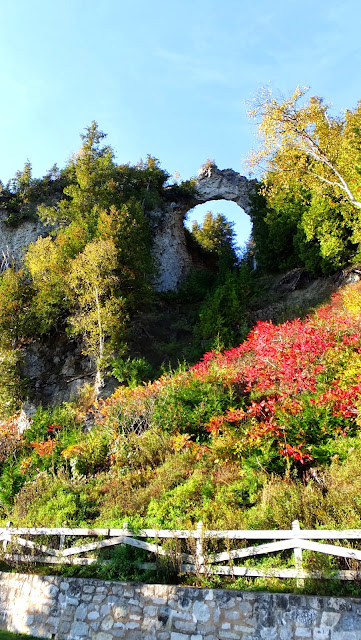 Looking up at Arch Rock 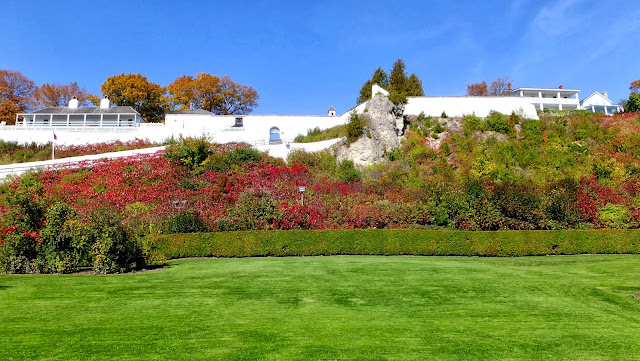 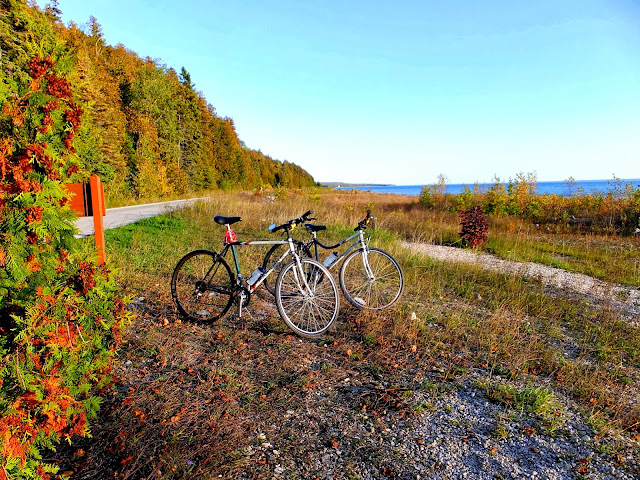 Our nineteen year old bikes, refurbished by our son. 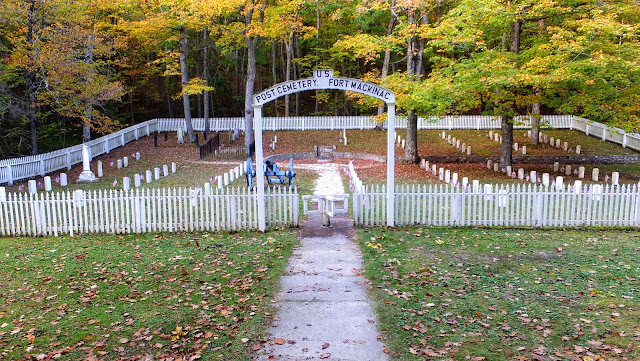 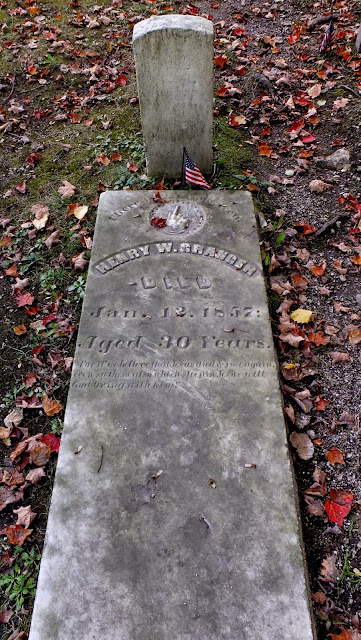 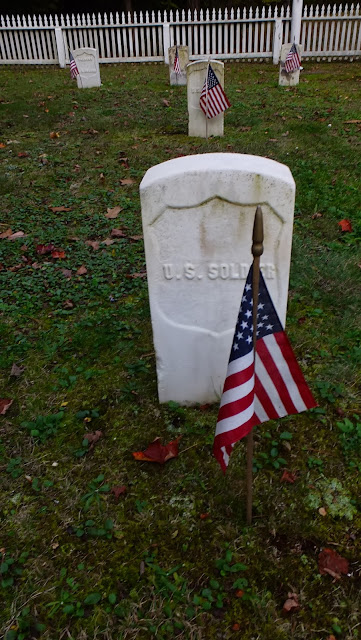 The best part of our bike ride was cutting across the island on the British Landing road, it goes down hill, and it was late in the evening so no people were around.  We flew down the road topping off at 23.6 mph, that was fun. 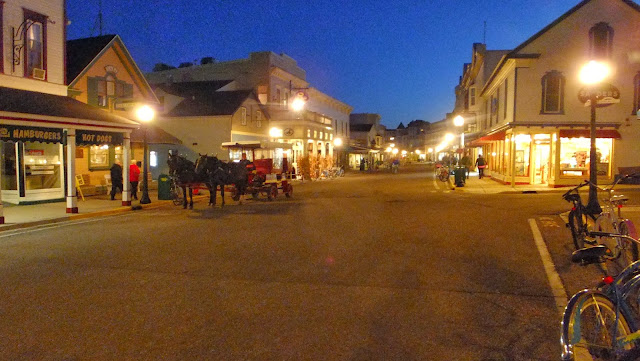 Both nights, there were beautiful sunsets. 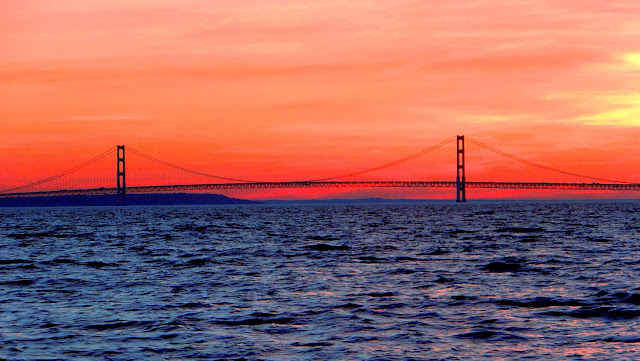 Sunset from Mackinac Island looking towards the Mackinac Bridge.  The colors in the sky were so vivid and beautiful it was difficult to turn away and ride back to the inn.  So I have many pictures of sunsets. 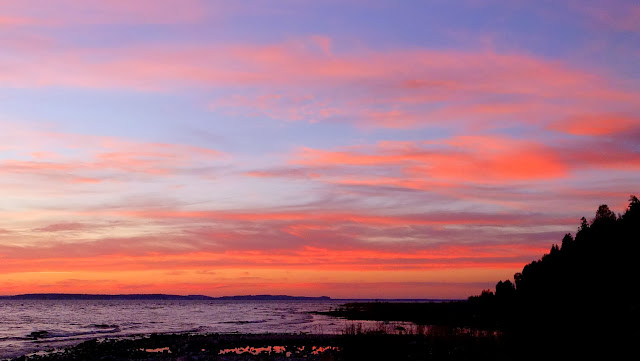 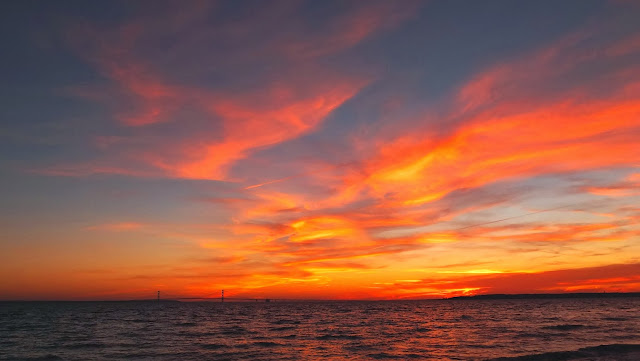 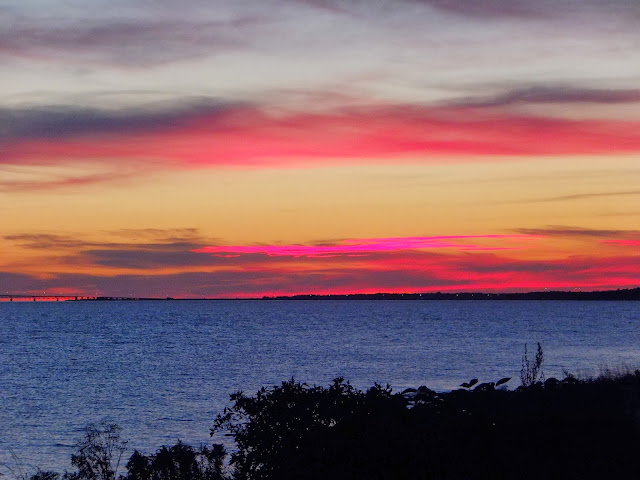 One night the sky looked like it had been highlighted with a pink marker.
We took a late afternoon ferry to Mackinaw City where our car was parked and drove all the way home.  This was a great trip.
Posted by Plants Amaze Me at Thursday, October 24, 2013

What a great place. Just the sunsets alone would have made it worthwhile for me! You got some great shots of them.

You should be the official photographer for Mackinac Island. Such beautiful photos, I want to go. The best is the tree, of course, silhouetted against a gorgeous sky. A barn, the flag, a lighthouse, and a cemetery, all favorite things. Your sunsets are spectacular! You are good. M :)

Mackinac Island is a great place to visit, especially in the off season. I couldn't stop shooting the sunset, I have so many pictures but each one is slightly different. And it was very dark when you looked away from the sunset. We did have perfect weather.
:-)

Thanks, M :) You say you want to go, I think you were invited, remember?
I could have put much more history in the posts. Even the history of the Harbour View Inn, "Back in 1822, it served as the retirement home for a legend of the American fur trade. Madame Magdelaine La Framboise defied the odds, overcoming sexism and racism to become one of the most successful traders of her time. Born to a French-Canadian man and his Odawan wife, Magdelaine married fur trader Joesph La Framboise at age 14. The couple ran a successful trading business until 1806, when Joesph was attacked and killed by a native American. Magdelaine was determined to succeed on her own. Despite competing in a cut-throat, male-dominated industry, she managed to expand her existing territory while cementing her reputation as one of the most prominent business women in the region. After working in this dangerous occupation for 15 years, Magdelaine decided to retire on the stunning shoreline of Mackinac Island in 1822. The manor she built here would later become the Chateau LaFramboise. Within these elegant walls, Magdelaine entertained dignitaries, military officers as well as many of her native American friends and family members. She never forgot her heritage, often wearing her Indian headdress to public events.
Magdelaine was also a philanthropist and her good deeds have had a lasting impact on Mackinac Island. She donated land to the St. Anne Catholic Church when it needed a larger property and she also dedicated herself to educating the island's children. Magdelaine became ill and died in 1846. She was buried at St. Anne." That must have been the mystery woman in the passage way to our room?

Okay next trip, you are invited, oh and it might be soon.
:)

sounds so fun. and only 246 miles away? I think you photoshopped the pink marker sky. I remember when you got those bikes. biospace chainrings. it was just after I got my Bridgestone MB-6. that bike is still around, it has a green frame now. I think it is in your garage unless you got rid of it. nice pictures and sounds like a very nice trip.

It was so fun, and yes here in Michigan we have a variety of interesting places nearby to explore!
I think it was 1994 when we got the bikes, dad got mine first then I bought one just like it for him.
Remember when we went with our bikes (and ferry) to the different islands? Neebish, Drummond, Mackinac, and Bois Blanc (you weren't with for Bois Blanc).
Biospace chainrings? I know my bike has a good crank? I don't think we have your green bike here but it might be in the other garage with the kayaks.
Maybe you should take a trip to Mackinac.
:)