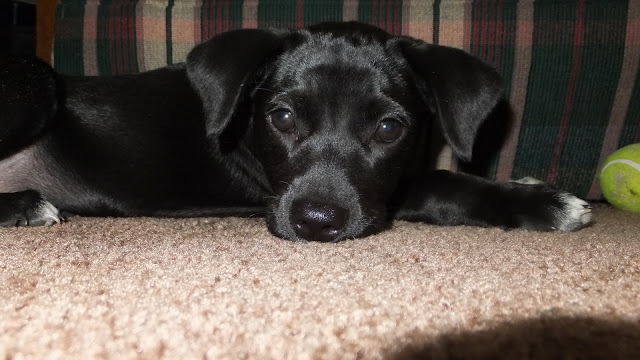 Clara is the puppy we adopted August 17 2012, from Puppy Breath Rescue in Grand Haven. 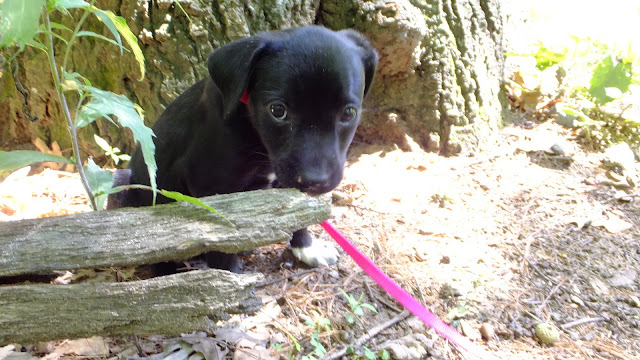 In this blog under 2012 you will find two posts all about our sweet, rambunctious, Black Lab mix pup.  The first post "Puppy Love Or Temporary Insanity?" talks about why I got another dog, partly because life is short or can be...
The second post "Puppy Clara"  featured her ears and how she was growing. 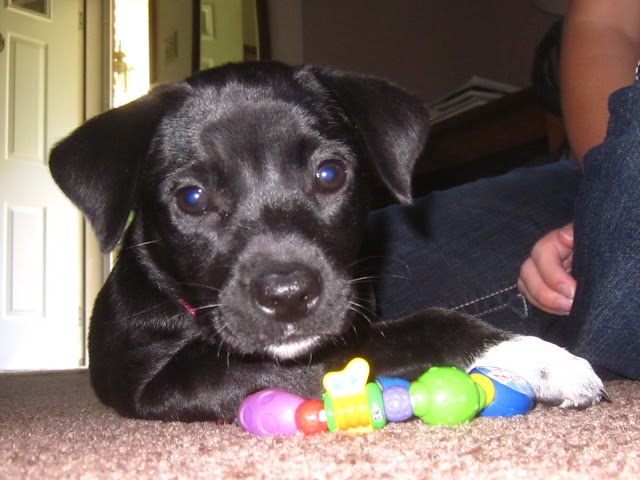 Well, Clara started having problems after her spay surgery at the end of November.  The vet at that clinic checked her in the middle of December and said she was fine.  The weekend before Christmas Clara started having pain. Not often, once a day, usually yipping when she got up from a nap. 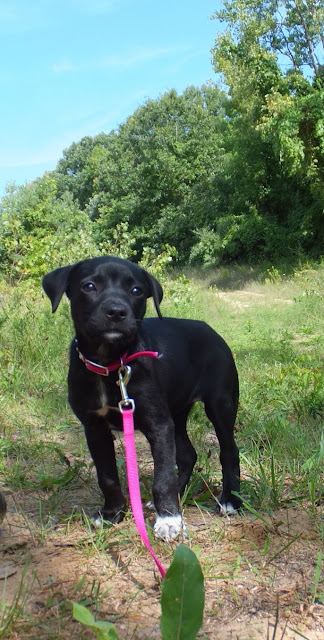 So we go through the weekend, then Monday is Christmas Eve, Tuesday is Christmas, lots of stuff going on, and Clara was still having this pain coming from some where.  She would be her normal self most of the day. 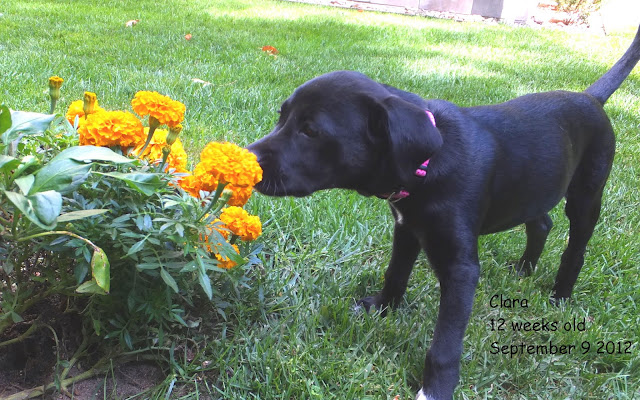 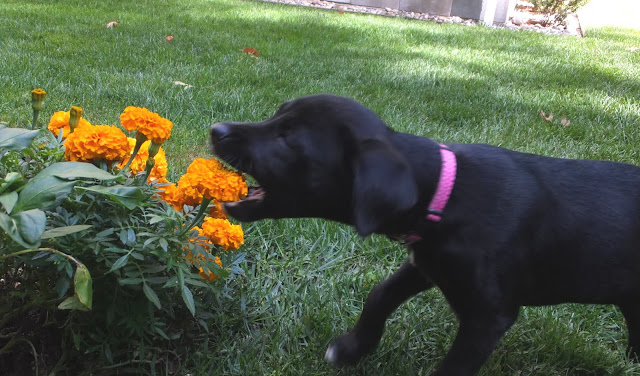 I tried to contact Clara's regular vet, but I just got a message each day after Christmas.  There was no information online about when they would be open again.  If an emergency, take her to the emergency vet hospital in Grand Rapids.  She really didn't seem to be having an emergency.  I kept her close to home, no outings and no rough play.  Maybe her back was sore. 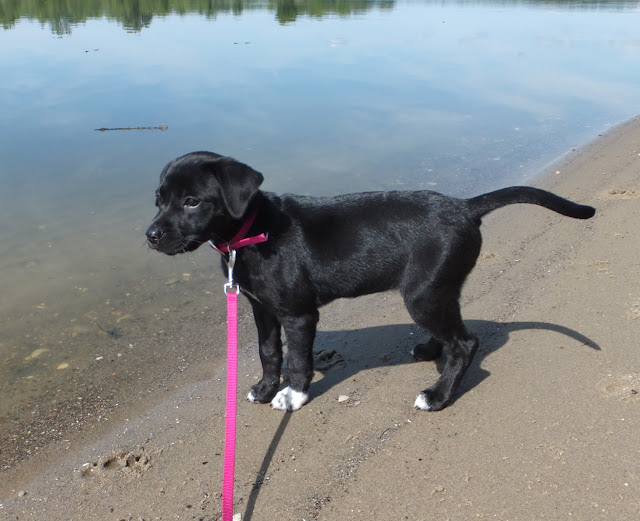 Wednesday, January 2nd, the vet was open but they couldn't see her until Friday.  Still Clara is fairly good but having more bouts of pain.  January 3rd, I called West Michigan Veterinary Services in Coopersville. It is distressing for me to make phone calls, I'm a bit timid. But when I called WMVS my call was immediately answered by a kind and sympathetic person.  I explained my tale of woe.  I was to call first thing Friday morning to get an appointment. 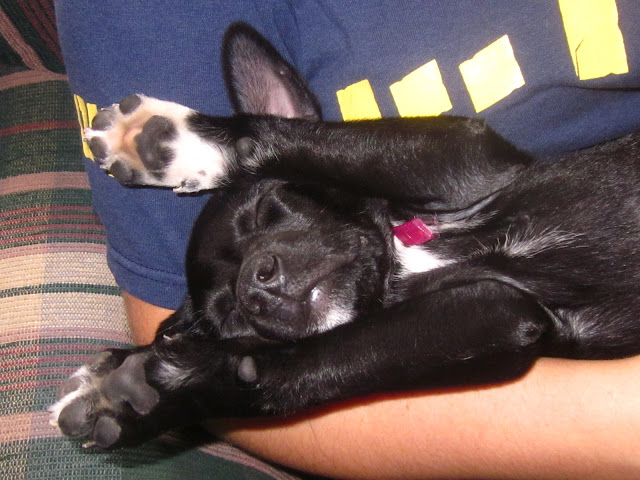 So Friday, my daughter and I took Clara to the new vet.  This vet check her out thoroughly, but tests were needed to pinpoint the problem.  Clara was vomiting once a day and having pain more often.  She was given a shot of Cerenia (nausea-controlling drug) and she was to fast for 24 hours.  Also we needed to bring in a urine sample on Saturday. 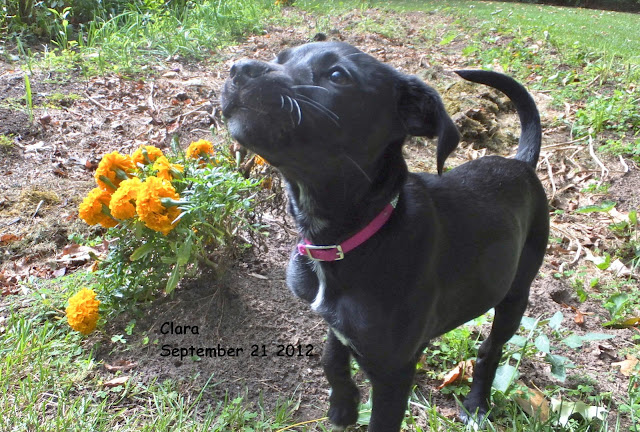 I had done hours of research online trying to put Clara's symptoms together, nothing made much sense.  I thought maybe she had a back injury, although she had been close to home for weeks with no falls or jumping... 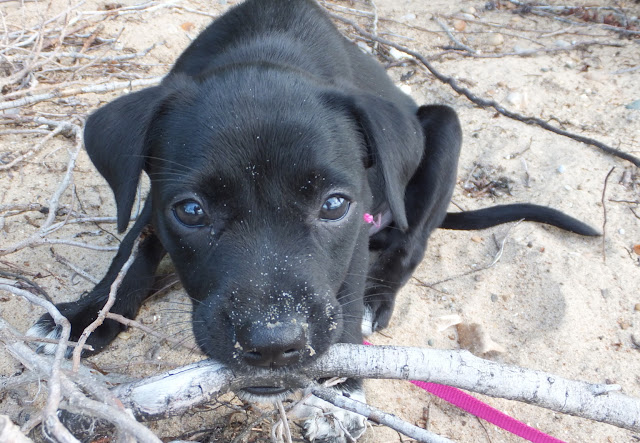 We got through the 24 hour fast, poor pup thought I had lost my mind because I didn't feed her.  I would just give her one-third cup of water in her food dish every few hours.  The next morning I managed to capture a urine sample from the dog, that was a first for me.  Clara came along for the ride to drop the sample off at the vet.  She was feeling pretty good, of course she wouldn't walk into the building so I carried her.  We drove home, she was fine in the car. 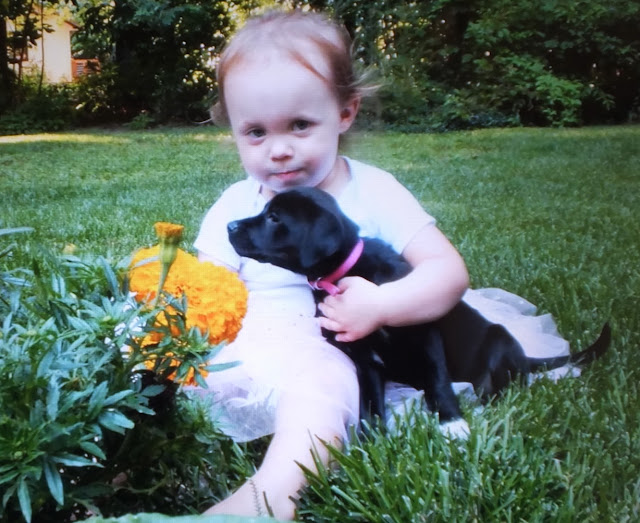 Clara with our granddaughter, Vivienne

The urine test came back showing no infection.  Throughout the day, Saturday, Clara was having more pain episodes.  Terrible yipping, then her body would harden with spasms.  She would lean against me, while I tried to support her.  I would tell her she was a good dog. We had been carrying her in and out of the house to potty, sometimes 12 times a day.  Saturday night was the worst.  She woke up in pain, and her bed was wet.  I really felt this was something more serious than a sore back.  But she would still wag her tail! 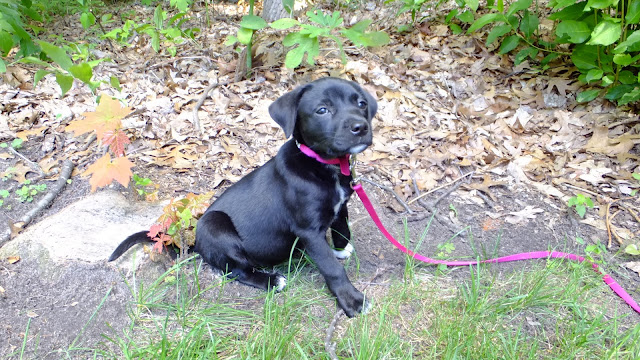 Monday morning, January 7, 2013, my sister Marie and I went on a different kind of adventure- she drove Clara and  me to the vet for another appointment.  They ran some blood tests, it took a long time, they thought the machine was having a problem.  Clara was just laying across my lap with her head resting on my arm.

It was a big shock when the vet told us that 6 month old pup Clara had advanced kidney disease!  Her numbers on the blood tests were extremely high, not a good thing.  I was a basket case after days with Clara having pain, I couldn't stand to see her in pain.  Any treatment held little hope, with poor outcomes.

As much as I wanted to keep my puppy I made the decision to have her put to sleep. 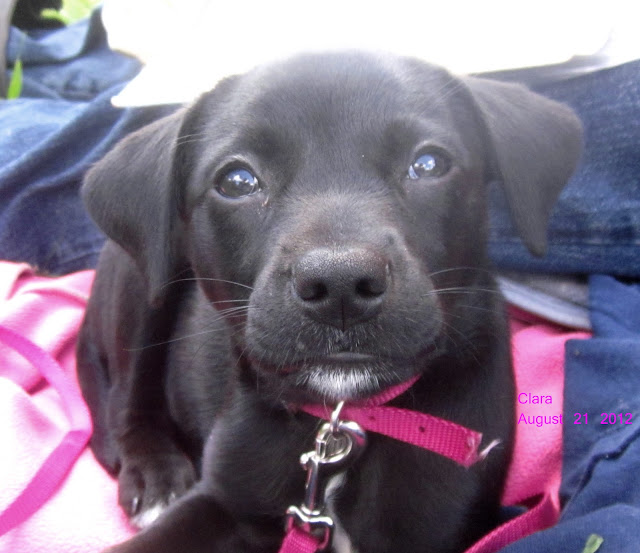 It has been a very sad week, but I wanted to get this post out there, in case someone might be having a problem like this with their dog.  I'm not sure how common this is especially in a puppy. 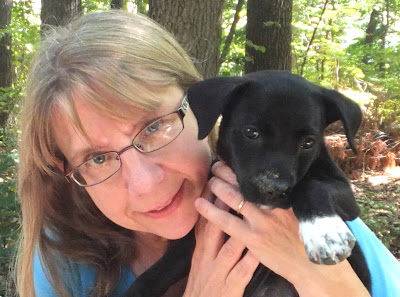 Clara and me on a happier day
Thank you for your kindness everyone who was there for us at West Michigan Veterinary Services.  And, of course, my sister Marie for going through this with me.

Now we are dogless again, and though I came to care for Clara very much, I will never get another dog. 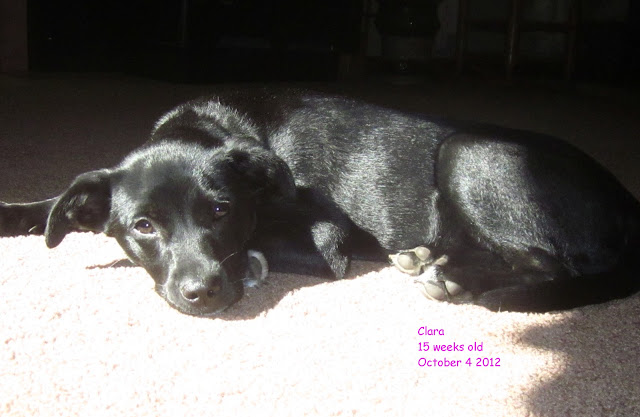 Clara was lucky to have the best family to care for her. M :(

I'm very sorry that you lost your little dog. As anonymous said above, at least Clara had a loving family to care for her. I'm sure she knew she was loved-dogs can sense it. Take care.

So Sorry to hear Chris, R.I.P. Clara, Do forget all the animals on your treks thru the woods can help you thru your loss.

M :-(
As you know it took time for me to adjusted to Clara, she was always there under my feet, biting my pant leg, chewing the furnture. I'd let her chew the coffee table to a toothpick if she was here right now.
And she went on two adventures with us! Remember sitting in the sun at Crockery Creek Open Space, she was chewing a stem of some plant, snuggled in your coat, Ok too sad.
Thanks for all your help, and all the time on the phone before and after Clara.
:-)


New Hampshire Gardener, Thank you. Yes I think Clara had a happy life. She was very social, liked other people and animals.

I did enjoy her and I miss her very much but it is too much heartache. She didn't understand why it hurt. And to try and fix the problem would have been more hurt.

I guess I will just concentrate on plants and other interesting things I find.

Thanks Dave, I will enjoy those animals in nature. As I was usually out often with Clara I saw some things that I probably otherwise would not have seen.

Christmas morning I was out early with her and we heard the Great Horned Owl!

Another day we saw a Pileated Woodpecker right here along the driveway on an oak tree.

I was glad to see your puppy dog on your blog the other day. A walk always seems to equal a happy dog (and person).

Now back to plants and nature.
:)

I am very sorry to hear of your loss. Like you, I will never have another dog either, it's too heartbreaking when they have to leave us.

Thanks Jerry. I thought I had wised up 11 months ago when our last dog had to be put down.
I'm not sure how often kidney disease happens in puppies.

From now on I'll enjoy other peoples pets only.
:)

I am sorry you lost such a loving puppy Aunt Chris :(

She looked so cute and happy at least you gave her an amazing home.

Thanks Tom. She was a little cutie, really. I miss her very much.
So you should come to Michigan for a visit, that would cheer me up!
Aunt Chris. :-)