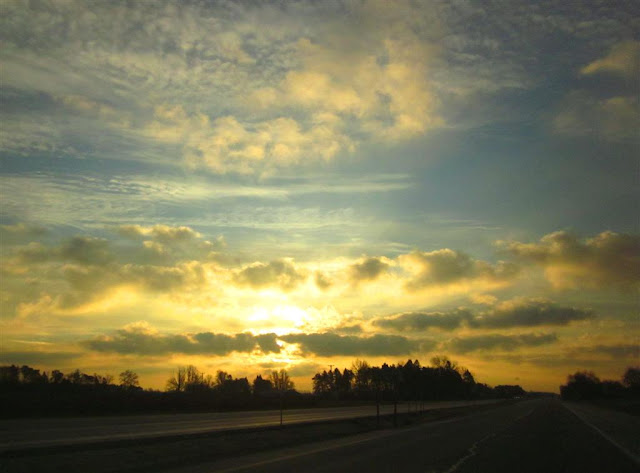 The sun was out as we drove southeast down U.S. 31.
We parked at the kiosk on the east side of 160th Avenue.


First pond we came to, we haven't been here before.
Same pond, we have come around to this slice of land that sticks out into the pond.

This is just west of 152nd Ave., we turned around and headed mostly west, but roaming.  Red Pine has been removed from much of this property and we were along a field where some had been cut. We saw this fern and decided to try and identify it.
OK let's see, it's green and fernlike...  But, oh no, Marie had her fern finder guidebook with and she was ready to use it.  First we had to learn a few terms, rachis, pinna, pinnule, stipe...she has already lost me but doesn't know it.

We went page after page, who knew this little tiny field guide could have over 50 pages!  I was enjoying a snack, sitting on the ground in the pine needles, while Marie read on.  In the end she declared it some kind of a Wood Fern.  She's so scientific.
The view while I snacked.

This little bug came to see what we were up to with the fern.
This is the second pond we came to, we did see this one last week. 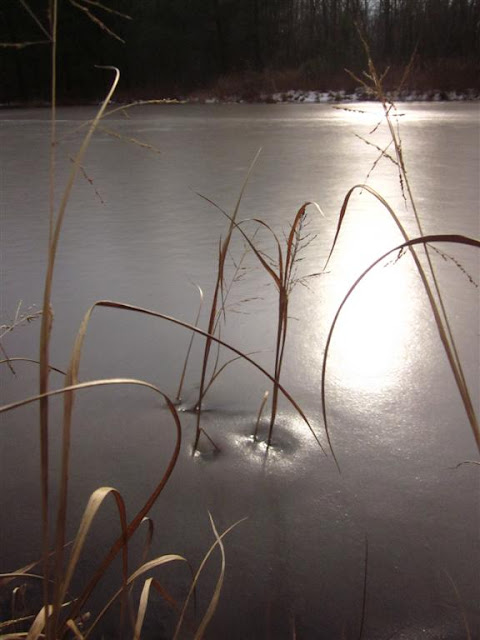 This is the third pond, it has a small island.

So this would be the fourth pond.  We saw lots of dried wildflowers near these ponds so we should come back here in late spring - early summer and check for flowers.
We made it back to the car, we had been out ~ 4 hours, now down the road about a 1/2 mile to the SW kiosk.
This time we crossed 160th Ave. walking east. We found dried Prunella Vulgaris.  Below is a photo of Prunella Vulgaris, known as  Selfheal or Heal-all from last summer.

We also saw some tall Balsam Fir, big rocks in a pile, old trash strewn around, a great White Pine, and the shiny dark green leaves of Goldthread.  We saw lots of Spicebush too.
Leaves of the Goldthread plant.

We kept along the bluff above Ten Hagen Creek.  We crossed some side creeks without falling in.

It took us 1 hour to get to the eastern boundary of the property, that was about 1/2 mile.  We had to "bushwhack" at times, we don't really whack any bushes, but it was tough going through patches of berry canes.

We turned back to the west following a two-track to 160th Ave., pines have been cut here too, then we walked north along the road to the car.  Whew.
More than five hours spent outside in the woods and water, fun day!
Posted by Plants Amaze Me at Thursday, February 09, 2012

This blog cracked me up! A fern finder, I'm not, but it was fun saying all the new terms.
Your photo of the green Clubmoss was so green, like a breath of spring.
The bug on the book with the green arrow pointing to it - clever!
The photo of the ice with the grass in it was surreal.
Prunella vulgaris was the princess at the fancy-dress ball.
Another favorite photo was the trees reaching up to tickle the white clouds on the blue sky.
We do too whack bushes, but only when they whack us first.

I really liked the picture of Prunella Vulgaris. Obviously it isn't blooming at this time of the year but it is Beautiful! Great day, glad you are having fun.
MJ

M :) You are the identifier of most things that we find! You might not always be right but you try hard. We do like our Prunella vulgaris, it's like a little orchid.

kayak1, I don't think you could kayak far on Ten Hagen creek. It's shallow and has many low branches. With this warm weather Mike is ready to get out kayaking. Thanks for visiting the blog.

MJ, You are right Prunella vulgaris doesn't bloom now. Doesn't it look somewhat like an orchid, maybe just a little? Your orchids are beautiful. Talk to you soon. :)